Born and educated in Poland, New York City based artist Monika Weiss steadfastly pursues representation of the body through mixed media. This endeavour comes to the fore in her latest Montreal exhibit, Marginalia. Its enigmatic figures create a dialectical tension epitomized by “Veiled.” Contrary to this title, viewers encounter the life-size semblance of a naked, rather than shrouded, human body. While it does feature a large patch, this piece of latex nevertheless replicates bare flesh instead of covering nakedness. What then remains concealed? Herein lies the key to works such as “Veiled,” namely that Weiss deals with skin like a body stocking, which masks as much as it reveals.

Her exploration of this hiddenness imbues Marginalia with a mystical vein akin to the concept of “aura” articulated by German cultural critic, Walter Benjamin. This makes sense seeing that Weiss, to all intents and purposes, reclaims the classical tradition of the nude as a touchstone for uniqueness in art. She therefore abstracts particularity and individuation from her portrayal of human beings, so that anonymousness paradoxically proves their distinguishing characteristic.

However, Weiss does not portray perfect bodies, unlike nudes which have their roots in Graeco-Roman antiquity, or the prelapsarian nuditas naturalis of Adam and Eve, pictured by medieval Christianity. Still, her figures scarcely represent true-to-life individuals. Rather, they constitute humanist icons. Not surprisingly then, Weiss affirms that “Surrender” and similar works in Marginalia bear affinity with the meditative devotional imagery of Pietas depictions of the Virgin Mary mourning over the body of Christ. Weiss likewise drew on Christian iconography for her installation “Saint Sebastian from Atlanta” (1996). The eponymous martyr’s legend served as one of the few subjects that allowed Renaissance artists to portray, in the pride of life and beauty, a standing, sometimes effeminate, male nude. Little wonder therefore that Weiss worked with a nude male model to develop her Atlanta project. This investigation of gender and identity marks a stage in her evolution towards figurative art that goes “beyond gender,” as she puts it.

Against this backdrop we perceive why Weiss eschews gendered representations in Marginalia. She tentatively states that this exhibition strives to depict humans as “in-between gender.” What to make of this ambiguous expression? Could it belie a utopian view of sexuality? Does Weiss entertain the provocative idea of “virtual genders” discussed by art historian Whitney Davis? Be that as it may, her aesthetic strategy runs the risk of presenting a post-gendered idealization of the human form.
More to the point, by virtue of its underpinnings in Christian art, Weiss approach to the body tends to sacralize it. Thus, despite the fact that Marginalia does not comprise religious symbols, this artist in effect eucharistically treats human flesh and blood as transcendent materials. 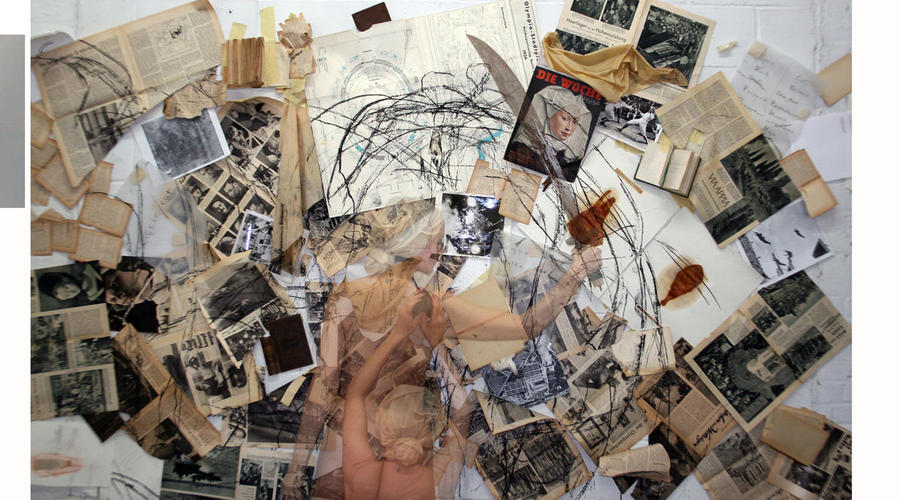 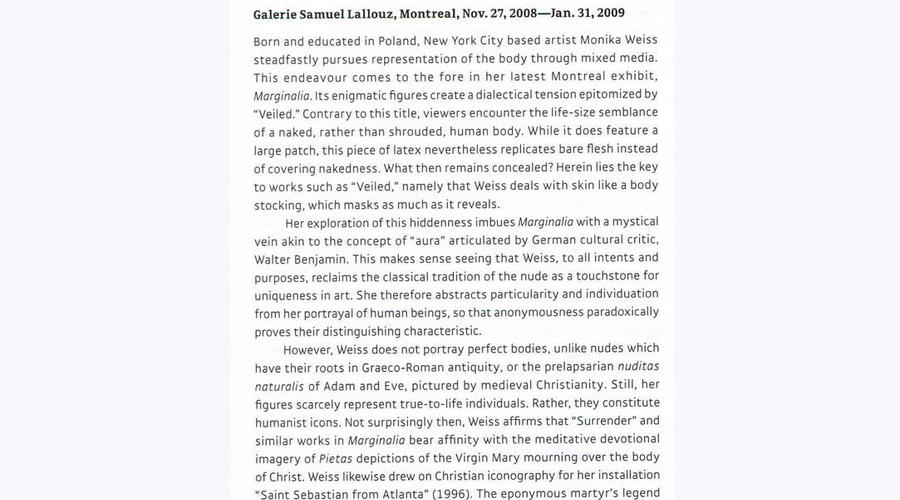