"...It is with the wreckage and rags that one should intend to write History..."
(Nicolas Bourriaud)


I passed that way nearly everyday since childhood. So the first time might have been in 1969, when I went to the movies by myself to see 101 Dalmatians, twenty-four years after the war. That movie was made in the year of my birth, and the song in the Polish version was sung by Ewa Demarczyk, whose concert I came to see here for the first time in my life. Nearly the entire area was inaccessible. The only buildings that were open were the “Polish Wool” Cultural Center and the Estrada auditorium, which was named after the company that managed the building. Perhaps there was some textile school nearby, but I never went there. The remaining buildings were factories that you could see only through the fence or from above if you lived in the neighboring high-rises.

Their inaccessibility was obvious to the child I was then and to the person I later became to be, as well. There were areas in the city and in the entire country that you simply could not enter because of a guard, gate, permit, rule, sign, or prohibition. Whole pieces of land were surrounded by walls, fences, or barbed wire. Besides, it is hard to imagine the full accessibility of a production facility. There was an understandable separation from the rest of the city due to safety regulations and the risk of intrusion, theft, or disruption. A small boy did not wonder about such things. All of these places were obviously forbidden. Even if one was allowed to enter with a permit, on a school trip, with a friend, or on some important business, it was still a journey into an area exempt from normal laws. It was mysterious, as if it was in a different country.

Even another language was spoken there—one appropriate to the product at hand and matters incomprehensible to the profane. The terrain adjacent to the center had at least seven large enclaves, and today only one is left. The rest has disappeared under new shopping malls, or is now used for other functions in a modified form.

This site, however, was closest to me because I lived nearby for nearly half of my life. I attended the Cultural Center for my first serious, though unfruitful, theatre classes. Here I also found out that I should never try to go to acting school. I felt the vibrations of the bass at the SBB concert in Estrada hall located twenty meters away. To this day, I remember it within myself; I remember it physically as a completely unique experience. I played electronic games there, and I played at an important charity concert with my band. I knew that hall and I witnessed it slowly crumble and disappear forever. I took walks there and observed the progress of the overgrowth, then the cutting down of trees, and then again the overgrowth. When the area was finally open, because everything was already ruined, broken and destroyed, I was astonished by how small the premises were. Everything shrunk down to a square, a large one maybe, but still just a square.

When writing these words, I heard a warning in my mind: "There may be aspects of memory that have no place in history: for example, aspects of my personal life that do not bear on—and may even be diversionary, tendentious, or irrelevant with respect to—certain issues. For this reason, resorting to anecdote and autobiography must be carefully motivated if it is not to be dubious.” [1]

I live in a city built by people whose descendants had to leave. They lived here normally, doing good things, but they were also participating in terrible evil. I knew of this from a historical perspective but somehow did not understand the local one. Only recently I saw a photograph in which the same Estrada was draped with enormous swastika flags. My memory rooted in this area turned out to be only a small fragment of the whole story. But it was also an experience of this place that denied the real story that unfolded here for a long time. Its reality involves us, the new ones here, everyone—why should it be otherwise? Knowledge of what happened here on this piece of land, events that were only a fraction of the war’s crimes, come to those living here bit by bit, or rather drop by drop; one can say they leaked out of the past, received without belief. There was some stone commemorating the “women”, because the word Jewish somehow could not be recorded. I, as well as other people, walking the same streets as seventy years ago, cannot comprehend how these honest wine-growers could have been involved in the Holocaust. Surely, as always in these situations, they did not see much from beyond their tall bushes. They were not, after all, some society unique to this world. That’s how it goes—fences, curtains, screens are as high as we want them to be. When things start to topple, disintegrate, and tear, there comes an unexpected revelation, but it is too late to do anything besides remembering the facts, restoring dignity to the victims, repairing the memory.

For a long time, this square was dead for the city. No one bothered to examine its properties, its meaning embedded in the past, especially when only trash and debris remained. For several years, it functioned “in between”; life was elsewhere, and this place was an enclave for frogs, hedgehogs, and ruderal plants, which might not have even been bad for the urban ecosystem.

Monika Weiss gave meaning to this site by bringing back the memory of the time when it was the scene of a crime (not that it had been characterized forever). It’s rather that the subjectivity of the women who were forced to labor [2] here was never brought back. The archives were burned; we do not know their names, faces, or fates. The artist symbolically transferred history to the present by means of inviting a group of young women from Zielona Góra to become a vehicle of the past events, to spend several hours on the site of the ruins. Their presence in this place, the artist documented from a great distance, flying on a plane above the city. From this perspective, the site of the former factory-concentration camp was just a small piece of the city mosaic. And the heroines became invisible. It was through this distance that the artist wanted to express her helplessness and inability to do justice to the real heroines of this story, our inability to remember specific individuals. When I accompanied her on this flight, looking from above, I realized the obvious truth about the insignificance of one individual against such violence. Simultaneously, I was taking part in the artist’s fight in the name of and in defense of singularity, in the name of not forgetting and of remembering carefully.

From eye level, the square became quite large again. When I stood in the middle of the rubble many weeks later, searching for the nonexistent traces of those events, I could no longer think of these premises without reference to what I have learned. This is not the symptom of some special sensitivity, just the simple effect of acquiring knowledge.

An artist is sometimes a teacher, a guardian of memory and a friend of the forgotten. Monika Weiss’ project reveals the cognitive-emotional role of art, which is appreciated only when the artist reminds us of things we were too lazy or afraid to remember: things that awaken fear and do not provide necessarily easy conclusions. After all, “we did not do all this.” At most, we forgot about the victims—well, not completely, not officially, but as a community we did. It is nobody’s fault, maybe just not an entirely wrongful collective abandonment.

The artist takes the side of the tormented, killed, and forgotten. The title’s shrouds do not heal, do not dress, and do not calm. They are signs of memory’s clinical death, a condition where we are still able to turn back. It is just up to us, the inhabitants of this city, whether and in what way we choose to resuscitate it. Monika Weiss diagnoses the state it is in—we have to take care of its change if we choose to do so—not in the name of a clean conscience, but for solidarity with every victim, no matter who they are. The worst case would be if we were to cut ourselves off from this memory with a new fence, a wall of omission, to seek one’s own identity, which is, after all, the sum of the city’s materiality, the history of its previous inhabitants and the building of a new world. You have to create in a space without barriers and curtains, in the full light of the purified “memory site.” [3]

[2] During the Second World War, the site was a forced labor camp for Jewish women, which in 1944 became a concentration camp governed by KZ Groß-Rosen complex. The women were kept on the site of the German wool factory, Deutsche Wollenwaren Manufaktur AG (later Polska Wełna, now converted to a shopping mall), and worked there as seamstresses supplying the German war machine with military clothing. At the beginning of 1945, the women were forced to evacuate on foot and sent on one of the most tragic of the forced Death Marches in the history of WWII. 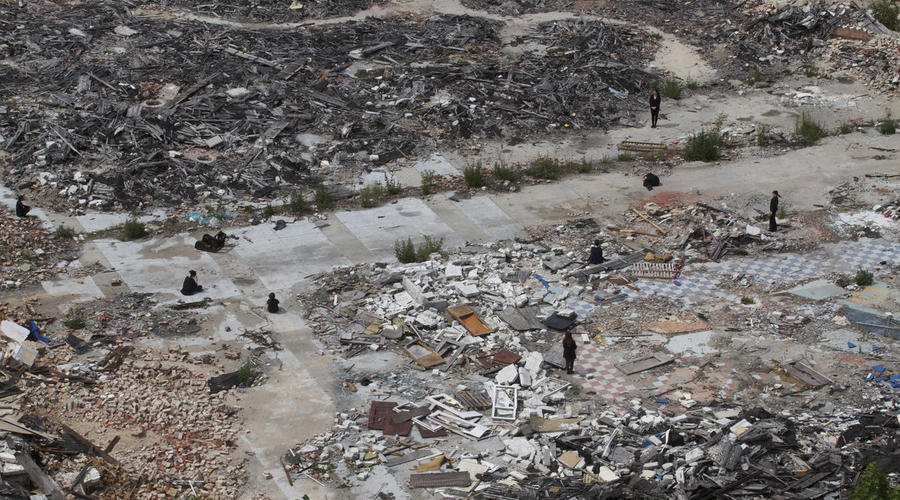 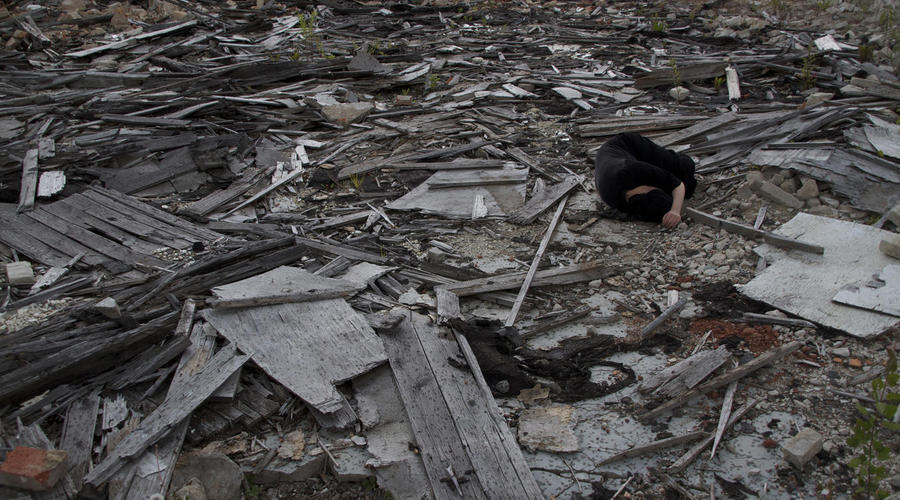 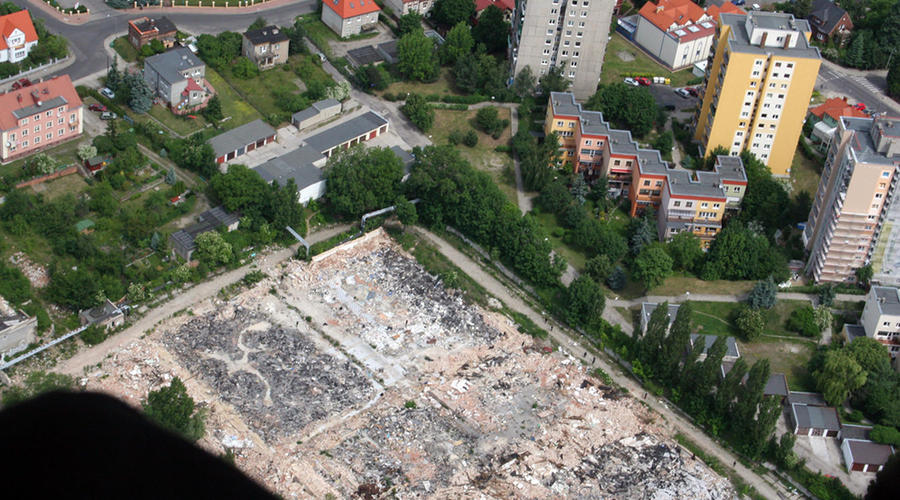 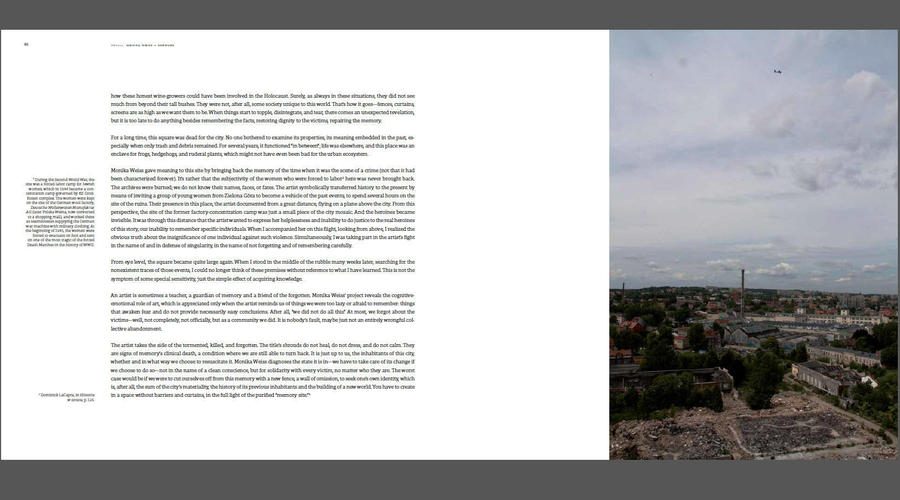 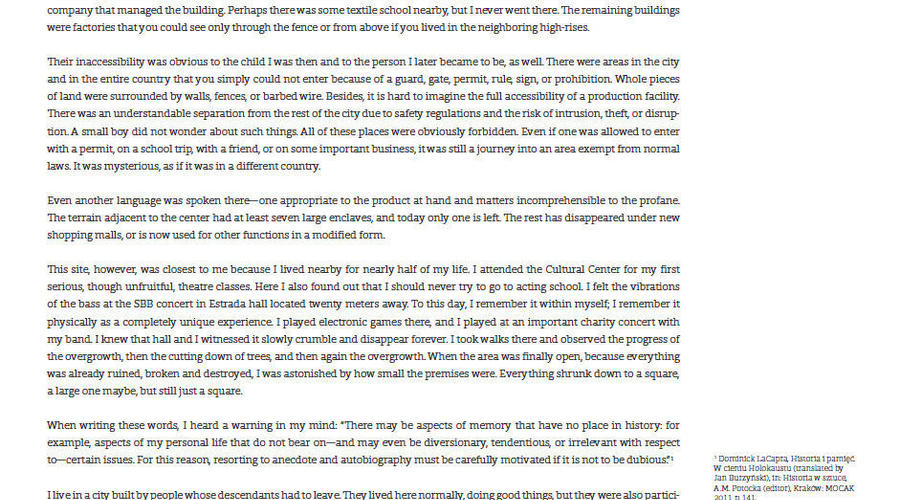